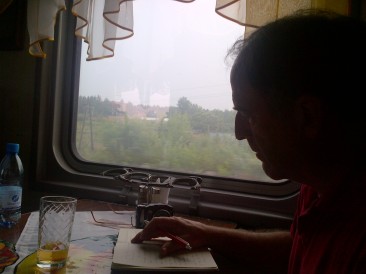 About Bob Kunzinger’s “A View From This Wilderness” :

These simple, weekly reflections will vary from teaching college to being a father to being a son to being alone. They will cover various time zones and emotions, and they  will be my small attempt to keep track of the passing of time.

Essay writer Bob Kunzinger lives and works in Virginia. His work has appeared in many publications including the Washington Post, the Chronicle of Higher Education, World War Two History Magazine, St Anthony Messenger, Kestrel, Southern Humanities Review, the New York Times, as well as several essays noted by Best American Essays. He has authored seven books, including Borderline Crazy, Fragments, and the critically acclaimed Penance, widely popular in the Czech Republic. His limited edition work, Out of the Way: Walking with Francis in Spain, was released by Limited Edition Books in February 2018 and promptly sold out. His new book, A Third Place: Notes in Nature, launches from Madville Press in August.   He is currently working on a book of essays about Siberia.

BOB KUNZINGER splits his time between traveling and not
traveling. When he is traveling, you can find him in places
as diverse as Spain and Siberia and Prague as well as West
Virginia, New York, and local pubs. When he isn’t
traveling he is pursuing his passions of hiking, hanging
out, and when he gets a chance, being a full-time professor
of arts, humanities, and creative writing. But usually he’s
traveling. His work has appeared in many publications,
including Kestrel, Southern Humanities Review, the
Washington Post, and more. Several of his essays have
been noted by Best American Essays, and he is the person
behind the award-winning blog.

Author Photo: on the Trans Siberian Railroad, east if Irkutsk